“What’s that? Is it new?”, asked the normally stoic husband.
I could have pointed out that ‘It’ had been hanging from roughly the same place for last six months, but that a man who rarely notices even when his wife has had her hair cut had even seen it was something quite out of the ordinary. But, looking at ‘It’ with dispassionate eyes, I had to admit it was hard to miss.
Fern-like leaves of a lovely green, interspaced with fluffy flowers of the palest mauve, cascading down from a hanging basket. Set against the cloudless sky, it could have been passed off as one of those delicately filigreed windows that dot the mosques of old Ahmedabad.
But it wasn’t always so. I still remember the day I had gone to the nursery looking for a ficus plants I could practice my non-existent bonsai skills on. Had almost zeroed in on the prefect plant – thickish stem, healthy leaves, a slight tilt – when I happened to glance down and saw what looked like a thorny twig sporting a few bipinnate leaves.
Long buried memories stirred – “Kya yeah chui mui hai? Is this chui mui?”, I asked in Hindi.
“Yes madam, forget-me-not,” the gardener answered, slightly inaccurately, in English.
* 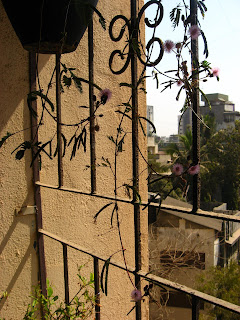 Touch-me-not, it may be called, instead of the more romantic name attributed to it, but the plant was indeed unforgettable. Three decades after I had last encountered it, just one look at the leaves was enough to revive the thrill of seeing the leaves close the moment my fingers touched them. Would not my four year old love playing with the plant – I could just see the glee on his face when he tapped the leaves and saw them snap shut the first time. I could anticipate the frequent trips he would make to the plant to make sure the leaves closed every single time.

It was silly to buy a plant that was essentially just a weed, and a poor specimen of the plant at that. But at ten rupees a plant, it cost no more than a packet of potato wafers packed with poly-saturated or unsaturated fats and cholesterol.
Back home, the plant was pulled out of the black polythene packet it came in, and planted in a hanging basket that had played host to a moss-rose that had succumbed to a fungal attack. The mimosa was not the most friendly of plants – that first encounter had left deep scratches on both my hands, and its thorns tried to foil my every attempt to water it.
But it loved playing with my son, and never tired of snapping its leaves shut every time he touched it. Soon the younger one learnt to get the leaves to close, and the older one graduated to experimenting with different ways of tapping the stem to make all the leaves snap shut. But the plant never let down its guard, and however friendly it got with the kids, it was still capable of attacking them with its thorns if it felt threatened. 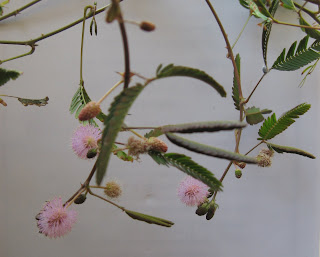 Considering the plant was little more than a weed, it was fussy - very,very fussy. It wanted to be watered every day, and if I ever forgot, it was quick to pull its leaves in and sulk. In no time at all, the routine got set – the mimosa got watered even before I had my morning cuppa.

I never realized when the plant metamorphosised from thorny twig to lush shrub, but one day, when I was standing at the window, I felt something flutter across my cheek. It was a pale green mimosa shoot which had swayed towards me, and was shyly pulling in at the touch.
The mimosa, now, is the prettiest of my hanging plants – its beautiful shoots forming a virtual curtain at my window. It has thrown out more flowers than I care to remember, and I have seen its seeds get dispersed by the breeze.

A gentle plant that asks for just a bit of attention before giving its all to you. A plant not too different from you or me.

Email ThisBlogThis!Share to TwitterShare to FacebookShare to Pinterest
Labels: Plants and Gardening