“What do you think I should paint?”, I asked my younger one.

“But I can’t paint eagles”, I said. “I can only attempt landscapes and flowers.”

“Do an eagle”, he repeated.

He could have told me that if I wasn’t going to take his advice, I shouldn’t have asked him the question. Or he could have sulked and told me to paint whatever I wanted. Instead he insisted that he wanted me to paint an eagle.

“If you only do what you can do, then what is the point?” he reasoned patiently. “You learn only if you try something new.”

“I don’t care. Make an eagle”, he replied with a shrug.

I glared at his retreating back. It was a test and it was a challenge. Was I going to back down? Or was I going to rise up? Had I backed off, he may have judged me or he may not. But could I survive how I would judge myself?

No, I certainly couldn’t draw an eagle, much less paint one. But did that mean I shouldn’t try? What was the worst that could happen? I’d waste a piece of paper and some time. I could certainly live with that.

And so I went to google- how do you draw an eagle, I asked. I followed the first few steps to get a form that looked a bit like one. Then I used a photograph to guide me with the colours. Spilt some paint, and covered it up. 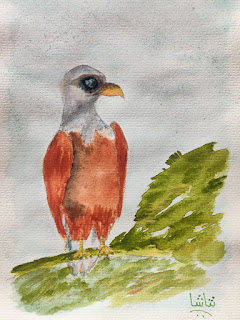 The eagle looks a bit like an eagle, but not too much. It could certainly look much better, but it could have been worse.
“What do you think?”, I asked my younger one.
“Nice”, he said. And smiled.
I think I passed his test.
Posted by Natasha

Email ThisBlogThis!Share to TwitterShare to FacebookShare to Pinterest
Labels: Kids and parenting, Watercolours