Never give up on anyone

Two years back, when I returned from a work trip, I found my mother had thrown out my plumeria.

“That plant is dead. You are just clinging onto it because you are too lazy to throw it out”, she chided when I asked her why she’d thrown out a perfectly good plant.

To be honest, she wasn’t entirely wrong. I am too lazy to weed or prune, and I almost never give a plant up for dead. The plants in my garden thrive on neglect and hope. And in this case, I had hope that, though it had shed all its leaves, the plumeria still had life left in it.

I sneaked the plant back in, and kept watering it. It appeared dead, but I insisted it was just dormant, and six months later, it proved me right by letting out two leaves. 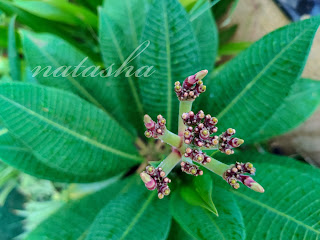 A year back, we moved homes, and with much more direct sunlight, the plant thrived.

“You are lucky to have inherited your Patti’s green fingers”, my mother told me when she last visited us. I didn’t tell her the plant with the glossy leaves in front of her was the same one that she had given up on.

A couple of weeks back, the plant gave out buds. Plants often give buds but don’t bloom, so though I hoped for a couple of flowers, I didn’t get my hopes up. I knew I would continue to love the plant even if the buds dried up the way they often do. 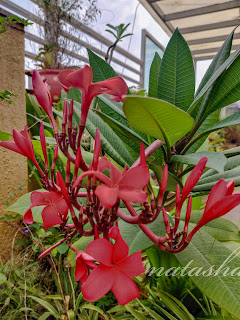 But this plant is a survivor. It had to show me what it was capable of.

Whether it is plants or people- never give up on them. 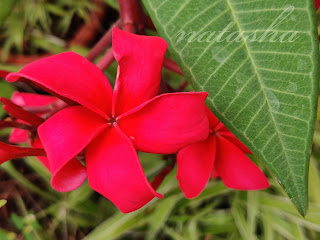 Email ThisBlogThis!Share to TwitterShare to FacebookShare to Pinterest
Labels: Musings on Life, People, Plants and Gardening