Rakshabandhan - the Tie that Protects, and an Award 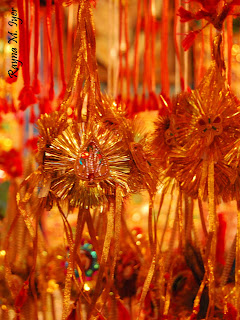 [Come August, for a few months, Bombay comes alive to the spirit of Festivals. Hindu, Muslim and Christian. Festivals from the region, festivals imported from other parts of the country. It is one long Celebration.]
Raksha bandhan. The Tie that Protects. The thread that a sister winds around her brother's right wrist. The promise made by the brother to stand by his sister come what may.
Rakhi. A simple band of woven thread. Bracelets of silver or gold. Decorative beads strung on sacred thread. Even cartoon characters stuck on a piece of ribbon. Sometimes kept on till they fall apart. Mostly removed at the end of the day.
Rakshabandhan. Originally a Hindu festival celebrated in parts of Northern India. Thanks to Bollywood movies, today a social function to celebrate the bond between brother and sister.
_____
A drabble is a story told in exactly 100 words.
For more photographs of 'Rakhis' being sold in the city markets, click across to my photography blog Snapshots of Bombay. 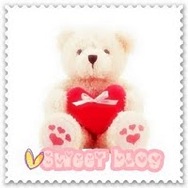 And since it is a day when girls in India honour their brothers, and because I don't have any brothers, why don't I pass on the most 'girlie' award I have to some of my favourite men?

Many moons ago, Carol Kilgore of Under the Tiki Hut passed on the Sweet Blog Award to me. While passing it on, she said, "here are others who have blogs much sweeter than mine." Thank you, Carol, that is quite the nicest thing to say.

The men I am passing the Award onto may not quite want their blogs to be 'called' sweet, but all of them are definitely 'sweet' in the nicest possible way-
Al @ Publish and Perish
Alex @ Alex J. Cavanaugh
Cold as Heaven
Galen @ Imagineering Fiction (you may be MiA, but you are not forgotten)
Lee @ Tossing it Out
Marvin @ Professor Old Silly's Free Spirit Blog (I know you will not pass it on, but that's okay)
Stephan @ Breakthrough Blogs

Thank you, all of you.
Posted by Natasha

First one sounds like a tie of great honor.

Very cool - I didn't know about these - thanks for sharing :)

Yes, I had no idea. How lovely.
Karen

Rayna - Thank you for sharing this tradition with us. I've learned something beautiful today from you and I am grateful. And congratulations on your well-deserved award! I think you've chosen a wonderful way to honour the spirit of this festival!

Your photo is beautiful. I love the colors and love learning about celebrations.

I love this drabble and your gorgeous picture. We are tying rakhis this weekend!

Wonderful of you to share the true tradition. As are the gentlemen you awarded :D
Jules @ Trying To Get Over The Rainbow

Thanks for the cultural lesson! I love learning things like this! That tradition sounds just wonderful. I'm blessed with a great brother. I think I'll go tell him.

I love the meaning behind the Raksha bandhan. What a wonderful tie between brother and sister.

Re: the August festivals ... are they celebrated by Muslims, Hindus and Christians TOGETHER? That'd be awesome if so...

Congrats on the award and I love the handwriting post you had yesterday. So neat. Have a happy holiday.

I like the sound of the festival, and the symbolism. I should make my kids tie ribbons on each other... (yeah... I can see how well that will go over)

Congrats on the award!

I too love the symbolism. And the pic is gorgeous!!
Hugs
SueAnn

Rayna, thanks for sharing this wonderful festival. In my own way I think I will take part with my brothers and the man in my life.
Your pictures on your other site are great. I enjoyed see all the different types of Rakhi sold at the market.

Congratulations on the award, well deserved. Thanks for sharing about the festival. It's interesting learning the different customs we all celebrate. Your photos are great.

Thank you for thinking of me. I'll give recognition to this on this coming Saturday's blogpost.

Lee
Tossing It Out

I love this and how you were so sisterly to pass your kindness on!~

I have a brother, and I love this idea. How wonderful!

Thanks for the award, I am only too happy to have my blog called sweet and to be sweet myself:-)

I loved the drabble.

@ Diane- it is meant to be one. I have never bestowed it upon anyone else, because I consider it so.

@ Jemi- you are welcome.

@ Margot- thank you. Any of them, I would be proud to call my brother.

@ Holly - thank you. And similarly, I adore your colour posts.

@ Jules- thank you, and I have been meaning to pass an award onto all of them for a long time.

@ Tina- I am an only child, and love hearing about people who have great siblings

@ Helen- it is a lovely tradition, isn't it?

@ Marvin - most welcome. And no, they do not all celebrate all the festivals together, but this is a Hindu festival which has been adopted by the Muslims and Catholics of Bombay too

@ Hart- I can kinda picture their reactions.

@ Mason- thank you, and my pleasure

@ Lee- thank you. Was an honour passing it onto you

@ Ellie- thank you. As an only child, I guess I do miss having a brother to share the festival with

@ Patricia- it is a great idea.

@ Al- your blog is sweet, as are you. Wasn't sure if you would like being called that, though.