Aliens battle it out 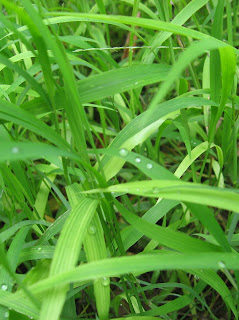 "Did you know, Mamma", the older one began while waiting for the school-bus to arrive. "Yesterday night, two aliens came here, and they were bad aliens, and they started fighting.

They hit each other with their shiny crystal swords. And because they are aliens, no blood came." His eyes were gleaming with excitement. "And then you know what happened? One alien hit the sword of the other alien very hard with his sword, and both the swords broke, and scattered small pieces of crystal everywhere. See!" He motioned with his hands.

All that to explain dew-drops glistening on the grass.

Email ThisBlogThis!Share to TwitterShare to FacebookShare to Pinterest
Labels: Drabble, the Things They Say

Rayna - What a creative and imaginative way to explain dew. I've never heard it better described, either : ). Love your drabbles!

Surely a budding writer in the making!

Look out Rayna. He may surpass his mom. :>D

I won't be looking at dew quite the same way now.
Mary

I think you have a future writer on your hands!

Makes sense to me. Now what if the drops decide to form together into one evil blob of water and starts to devour Bombay. Now you have a story.Kinda like the blob.

Debra She Who Seeks said...

Just lovely. And Stephen is too funny. :D
Trying To Get Over The Rainbow

I wish I had an imagination like that! I'm so jealous. You better be writing these down... oh wait, yup, perfect reason for a blog. You can look at these in the future and smile.

I love the explanation. Your son is great :)

The most beautiful interpretation of dew I ever heard from a kid. What an imagination. Love your drabbles, Rayna!

Your children are gaining the benefit of the great common sense you have Rayna, this was wonderfully written.
Yvonne.

What a great imagination! And the "Alien" caught my attention right away.

I certainly don't have a better explanation. Do you?

OMG! I love this! Who's your budding little author? Good thing you wrote this one down~ :o)

Sounds perfectly logical to me. I just wish I was there to see it.

I think boys like the idea of having violence without blood! All the fun, none of the mess. :)

What a beautiful story!

@ Margot- I am yet to get over it myself. What wonderful imaginations kids have.

@ Laura- I would love to believe that.

@ Mary- no way. He's long surpassed me, and aren't I a proud parent?

@ Stephanie- he does say he wants to become a storyteller, so...

@ Stephen- now that sounds almost scary. Never tried my hand at science fiction- maybe I should.

@ Clarissa- I wonder where that imagination goes when kids grow up- there are so few adults thinking like that.

@ Pramodini- thank you so much.

@ Yvonne- thank you. But to be honest, it is they who are introducing me to a whole new world.

@ Michele- nopes. But your kids may have one.

@ Leigh- it was the second grader who then proceeded to demonstrate how the swords broke with his brother and ended up hurting himself and dirtying his brother's school uniform, but that is a whoe new story, which I am not telling right now.

@ Theres just life- it is logical, isn't it? Why don't I ask my aliens, to fight outside your yard tonight?

@ Cruella- he's lucky to have you for an aunt.

@ Elizabeth- yes, they do. Boys will be boys.