"We simply continue to fly" 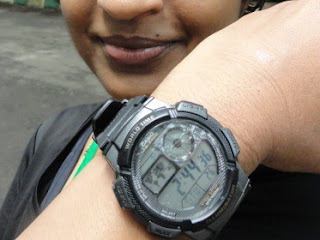 Twenty-four hours after completing the run, my stopwatch is still paused on the time when I crossed the finish line and had the medal slipped around my neck. Everytime I reach for the re-set button, the heart rebels. I want the numbers to stay on my wrist for just awhile longer. It might have made sense if I had knocked a whole bunch of minutes off my previous time, and set a new Personal Best. But the numbers on the dial of my watch mark the second worst timing I had ever turned in at a half marathon. But in a race where things go as horribly wrong as they did in the BNP half marathon, just finishing is an achievement.

The Borivali National Park is beautiful at any time of the year- rolling hills, lush forests, gurgling streams, tribal hamlets, exotic flowers, chirping monkeys and the occasional roar of the big cats - but it is in the monsoon that the place really comes alive. Bare rock faces get adorned with waterfalls, the streams swell up and threaten to overflow, clouds dart across the rock faces teasing you to catch them.
There could have been no better setting for the Half-marathon organized “by the Runners, for the Runners” than Borivali National Park, and no better time for the race than in the monsoons. The course would be challenging, we had been told- we were prepared for the steep climb at the midway point of both the loops. What we had counted without was the fact that there would be one brief shower early in the morning, after which the sun would make a rare appearance and bless the proceedings for the rest of the morning.
We started out strong, gradually finding our groove. Running with friends you were meeting after long, or after the last weekend. Admiring the lush green canopy, delighting in the patterns formed by sunlight filtering through the leaves, smiling at the antics of groups of monkeys. “Is this the steep incline?”, first timers asked on the gentle inclines, and I smiled silently thinking of the surprise in store for them. Yes, the first lap was delightful- relief cars and bikes going past shouting encouragement, smiling volunteers handing out drinks, exchanging high-fives with returning runners.
But somewhere after the first turn around, things changed. The course had been tougher than we had assumed it would be. I hadn’t hit anywhere close to my target time. The sun, which till then had been so benevolent, suddenly turned stronger and nastier. The streams and hamlets no longer looked as pretty, because I couldn’t ignore the fact that I would have to pass them two more times in steadily worsening conditions. The eyes started searching for the kilometre markers, and I looked not at the distance run, but at the distance still ahead.

It was after turning back for the second loop that I realised how utterly foolish had been the decision to leave my water bottle behind at an aid station. My electrolyte balance was going haywire. I wanted to swallow an energy bar, but didn’t have water to wash it down with. I slowed down to a run-walk, which soon became a walk-run. It was still sheer torture. For the first time ever in all these years of running, I seriously contemplated dropping out. “Forget it”, I told myself. “This is just a race. It is not worth killing yourself over this. There are people who need you alive. Drop out now, and come back again next year, if you must.” But the mind had lost the capacity to implement decisions. I put one foot in front of the other, and plodded on.
In that delirious state, I passed many of my friends on their way to completing the first loop. Kripa, Neeta, Anjali, Chitra. All showing various degrees of exhaustion. All with a look of intense determination on their face. Unbidden came Washington Irvin's words- “There is in every true woman's heart, a spark of heavenly fire, which lies dormant in the broad daylight of prosperity, but which kindles up and beams and blazes in the dark hour of adversity.”
I took strength from my friends, and a sip of water from Kripa, and plodded on till I reached the aid station, where I gulped down three glasses of water and a sachet of electrolyte. “Only eight kilometres to go”, someone said. “You can do it.”
“Of course I will”, I shot back, sounding braver than I felt. But when I tested my running feet, I found I had regained my rhythm. My old problem of water retention has re-surfaced- I could no longer flex my fingers, and I knew my face had puffed up, but my stride didn’t faulter. I crossed my old friend, Tushar, just before the steep incline that marked the approach of the last turn-off point. “Do you want me to wait for you?”, he asked, concern registering on his face. “No, carry on. I’m fine”, I said. Regardless of how I looked, I was okay. 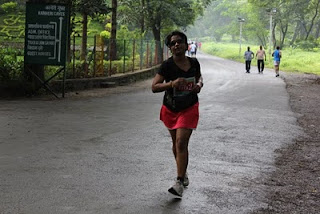 Nothing mattered any more- not pace, not distance, not time. I stopped looking at my watch. I could see the kilometre markers, but they barely registered. People overtook me in a sprint, I overtook them when they slowed down to a walk. It went back and forth, till I saw the last kilometre marker. “Come on guys”, I told them. “You can’t walk now. You owe it to yourself to run the last kilometre.” None of them really wanted to, but they rose to the challenge.
Five hundred meters from the end, I saw Roshni running up to meet me as she always does. My pace quickened to match hers. She speeded up, and helped me finish on a sprint. The Finishers’ medal was slipped around my neck. I had completed. I had won.

Never before had I come as close to quitting as I had during those three kilometres where everything had gone horribly wrong for me. Never before had I recovered as well, to finish as strong.
“When you think about it, what other choice is there……give up, or Fight Like Hell." ~ Lance Armstrong

For the next hour, the finish line was crackling with emotion as one after another of the runner girls finished their runs. They ran, they walked, they would have crawled if they had to, but they crossed the finish line. Tears mixed freely with sweat, sealing moments and memories that can never be taken away.
It had been a gruelling race. But I had done it. We had done it. "Women are angels, and when someone breaks our wings. We simply continue to fly. On a broomstick if need be. We are flexible like that."

You get back home. Life takes over. Memories blur. You forget how your core values were tested and of how you rose to the challenge. Maybe that is why I refuse to re-set my stopwatch. To remind myself that some things are bigger even than ourselves.