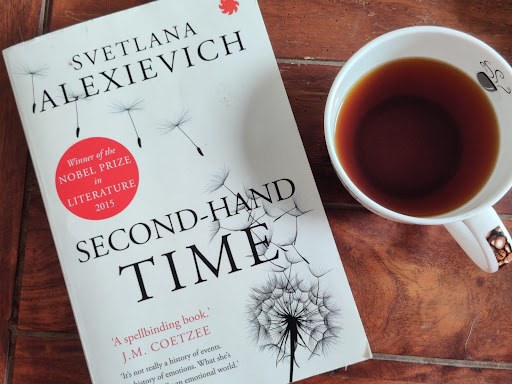 One tends to use the word “brilliant” quite loosely, but if one book totally deserves being called that, it is this. The book is written as a series of reminiscences- the people are often not identified, and at times one set of memories merges into another, but there are so many perspectives that between them, a composite picture gradually starts to emerge.

One is left almost incredulous at how people, despite suffering in the hands of Communism continue to swear by it. One wonders why some people wanted a change, and others didn’t. One is amazed at how people willingly put up with poverty as long as they had their books. One wonders about the resilience of a nation that keeps springing back.

As someone who believed in Communism and hoped it would usher in a better world. As someone who watched the rise of Gorbachev and bought into his vision of perestroika and glasnost. As one who saw the death of the Soviet Union and the emergence of the CIS, the book was a fascinating look from within.

Svetlana Alexievich has been called the ‘memory and conscience of the twentieth century’. This book proves why she earned the title. Her’s is a unique literary genre, one that blends journalism with lyricism; or as the Nobel Prize committee described it, “a history of emotions . . . a history of the soul.”

But what stands tall over her literally style, is the portrait of the nation and her people. What remains with you after you finish the books is this one quote- “In five years, everything can change in Russia, but in two hundred — nothing.”