The United Colours of Navratri

The Navratri Colour Code united women in a tight Sisterhood. It is meant to be celebrated, not imposed.

Twelve years back when I had re-entered the formal workforce after a break, amidst lots of discussion and banter, the “colour code” for Navratri was written out and posted on the office noticeboard. Those were days when I was going through a monochromatic phase, so on the first day, I wore red earrings with my black shirt and indigo jeans. On the second day, feeling festive, I draped a blue stole over my white shirt and faded jeans. The next day when I had to go to office, the colour was ‘cyan’, and since I happened to have a dressy cyan and purple kurta, that’s what I wore. On the way to work, I noticed something strange- almost all the women in my railway carriage were in cyan. Thinking back, I realised that most of the women had been in red and blue the previous two days too, but since they were common festive colours I hadn’t noticed. But cyan? An entire city of women in cyan, when most people don’t even own a single piece of clothing in that colour. That was my first introduction to the famous “Navaratri colour code”.

When I asked, I was told that a different manifestation of the goddess was worshipped on each day, and the colour was dedicated to her. For the next couple of years, I worked out of a home office, so the Navratri colour code was something I was only vaguely aware of, but I did notice something strange. The order in which the Goddesses were worshipped remained the same, but the order of colours changed from year to year. Clearly, the colours were not associated with the Goddesses!

Then someone then told me that the colours were decided by the Nakshatrams, but even that didn’t explain why some colours remained constant year on year, but others changed. What was also not explained was why the order of colours was never the same. Finally, I realised that even people who have been participating in the Navratri Colour Code for years have no clue where the colours came from, so I took to google to seek answers.

The mystery was finally solved. There is no religious significance to the colours. The Maharashtra Times first introduced the Navratri colour code in order to engage with the female readers and boost their circulation figures. The Navratri colour code proved to be so popular, it spread across the state, and through saree pacts spread across the nation and even abroad. Navratri Check out the popularity of Instagram or Facebook and you see how people plan their wardrobe well in advance so they can be a part of the global “Navratri colours” hashtags.

But what are these colours? Do they have any significance?

They do. The days of the week are named after the Sun, the Moon and five planets, each of which is associated with a particular colour. These are the colours that form the base of the Navratri Colour Code. 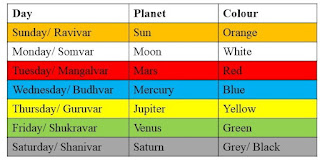 Once you know this, cracking the colour code become easy. In fact, there are many women who follow the colour code even otherwise. My grandmother, for instance, always wore red on Tuesday and black or blue on Saturday. It was something she did as a matter of course.
But hang on, what about pink and purple. Cyan, peacock green and sky blue. Where did they come from?
Good question, simple answer.
Once the first seven colours are allocated, the other two slots are determined by the person who finalises the code every year. Maybe she has a purple saree she wants to drape?
Why then is it so popular?
The Navratri colour code is popular because it is fun. Participating in the trend is a way to assert your individuality while submerging in a collective. It symbolisers Sisterhood. Whether you are the CEO or the lady cleaning her room, you were in the same colour. I have had colleagues remove their black burqas in office to reveal Navratri colours- it was a social celebration, not a religious one.
But now, the colour code is being forcibly implemented. The Senior Management of a PSU bank not only made it mandatory that all employees and vendor partners conform to the Navratri colour code, they threatened punitive action against those that did not. The circular even specified that the colour of the day should be the base colour of the outfit to be considered. While any organization is within its rights to specify and implement a dress codes, they cannot impose a custom that is religious in nature. Thankfully, it was withdrawn after public outcry, but it is a sign of a country that is moving far away from it’s secular tradition.
What is more ironicay is that the colour code which is being implemented by threatening punitive action against who do not confirm is of questionable significance. India is a pluralistic country. We have a wide diversity of customs and traditions. To impose homogeneity is to go against the ethos of the country. And that is extremely disturbing.
As for me, I did dress according to the colour code this Navratri as I have for many previous Navratris. But I did it my way. Once the seven days were completed, I circled back with yellow and green which are the ‘official’ colours of the day. My grandmother would certainly approve.
Posted by Natasha