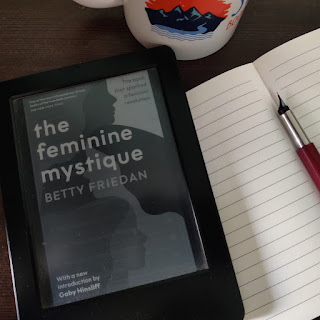 I am surprised I didn’t read this book earlier, but I am also glad I finally read it. The second wave of feminism is one that I actively rejected, because of the negative press it got. For many like me, “I am not a feminist, I believe in equal rights” was a badge we wore with pride. After a lot of meandering and mistakes, I finally understood feminism, and why everyone should be a feminist. So now is perhaps a good time to read the book.

Sometimes when I look pictures from the 1940s, or read about some of the women of that generation, I find it hard to reconcile with the image of the pretty suburban housewife with her perfect waves (or buffoon) standing behind her wicket fence. This book demystifies it. And you realise just how insidious the ‘feminine mystique’ could really be. There is so direct parallel in India- we didn’t have a generation of women who got out of home, and then chose to move back in- but it should serve as a cautionary tale. Every woman should have something to do that occupies her brain completely- whether work or volunteering or the arts is not the point, it should be a full time engagement.

I have two minor gripes, neither of which really takes away from the book, because they are a function of today’s times. Firstly, the chapters are overlong and often repetitive. Yes, she has done an insane amount of work, but better editing would have made it far more accessible. Secondly, and more importantly, the book is only about the privileged white woman, but though it never pretends otherwise, it is not directly spelt out. Many women never have the choice to not work more than one minimum wage job while also keeping home as best as she can.

Apart from these two minor issues, where I disagreed quite virulently with her was on how she “blamed” homosexuality on over protective mothers. Yes, the book was written many decades ago when we didn’t know as much as we now do about homosexuality, but read from todays’ context, it was very jarring.

If you haven’t read the book yet, do. It is an important work in the feminist movement.