Vengeance is not the same as Justice

[Ten police officers who had killed 4 young men arrested for the rape and murder of Hyderabad doctor in an "encounter" have been found "guilty of concocting their story, and were to be charged with murder." What are the ramifications, I wonder in this article first published in Women's Web.]

December 29, 2019 was a Friday no different from any other. I was running late so had no time to read the newspaper. On the way to work, I logged onto to Twitter to catch up with the news. The first thing I saw was the breaking story on the horrific gang rape and murder of the 26 year old doctor on the outskirts of Hyderabad.

The brutality of the crime left me cold, as did the fact that it could have happened to anyone. The victim (who’s name was then made public, but was subsequently called #Disha for anonymity) was returning home from work on her two-wheeler- she could have been someone I knew. The route she took was one that I had taken often, especially at night. #Disha’s charming face and attractive smile contrasted sharply with the photographs of her charred body. We mourned her senseless loss.

As more details emerged, we all realised just how vulnerable we were while going about our daily life. Any of us could have developed a puncture on a highway, any of us would have pulled up at a toll plaza and called relative or friend when we felt unsafe. We have all been in similar situations. But #Disha was unlucky enough to be gangraped and brutally murdered.

The weekend passed in a haze. We mourned the senseless death of a woman who had her entire life ahead of her. Her smiling face reminded us that better lighting, more frequent patrolling and greater monitoring of CCTV cameras may have saved her life. We were shaken. 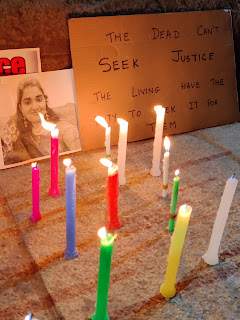 That Sunday, I attended a candlelight vigil to protest against her killing and to demand action. I went because I thought I owed it to her to pay my respects. I hoped that the gathering would get a conversation started on how to create systems that women could access in an emergency. But more than anything else, I wanted to be a part of the collective grief.

What I saw there shook me to the core. While I felt grief and sorrow, the overwhelming emotion was anger. The poster I carried said - “The Dead cannot seek Justice. The Living have the Duty to seek it for them.” But it was not Justice that the public wanted- they wanted Vengeance. All the people who spoke demanded an “encounter”. The crowd set up a chant saying “We want Encounter”.

Clearly the Police was listening to the public. Within days, four youth were arrested in connection with the gang rape and murder, and on December 6, 2019, all four were killed while allegedly attempting to escape while recreating the crime. An Encounter. The bloodlust of the public was satiated. The police received bouquets for ensuring the case was closed in a speedy manner. Everyone moved on, satisfied that ‘Justice was served.’

But was it? Isn’t there a difference between Justice and Vengeance?

Justice would have been served by ensuring the case was fast tracked. By enabling the police to gather enough evidence to get the courts convict the perpetrators. By empowering the courts to convict and sentence the guilty. The family of the victim and the society as a whole would have found closure if the guilty were brought to book and were given the punishment due to them.

Instead, the accused were killed by the Police in what was euphemistically called an “Encounter”.

A Commission of Inquiry set up by the Supreme Court to probe into the incident tabled the report, where it clearly states that “the accused were deliberately fired upon with the intent to cause their death and with the knowledge that the firing will invariably result in the death of the deceased suspects.” The report further advices that murder charges be brought against the policemen involved in the incident.

Far from bringing closure, the ‘Encounter’ has created a new cycle of violence. Four unemployed youth from marginalised communities, of which three were minors, lost their lives on the suspicion of being the perpetrators of the crime. Four families were destroyed and the family members ostracised in order to satisfy the bloodlust of the public. We will never know whether these were actually the perpetrators or not. We will never be able to get rid of the suspicion that the actual perpetrator has escaped and may repeat the crime against some other young woman.

If murder charges are brought against the police officers, many more families will be affected. None of that was the public wanted when it screamed for instance justice.

There will still be people who say that in a nation where Justice is always delayed and often denied, the public cannot be blamed for demanding instant justice. This is particularly so after horrific crimes against women, where people believe that an equally gruesome punishment will deter others from committing similar crimes in future. That, however, is not the case. Before committing a pre-planned crime, a criminal takes two factors into account- the magnitude of punishment and the probability of being punished. Merely increasing the punishment is not enough; crime will be brought down only is the probability of being punished is made much greater. Today, most crimes are not even registered because victims fear accessing the police system, of the crimes that are reported very few actually make it to the courts; courts delay the hearings and it is often years before the sentence is passed. Given the low probability of being punished, very few are deterred from committing a crime by the legal system.

If the probability of being punished is made higher, crimes will automatically come down. This can be done with better systems- better patrolling and more responsive helplines to bring down the crime; sympathetic policemen, legal aid and counselling to encourage victims to come forward to report the crime; efficient courts and time bound closure of cases to ensure speedy and assured justice. Once these measures are implemented, crimes against women will start going down.

Instead of seeking vengeance after horrific crimes, the public should push for faster and better judicial resolutions. That is the best tribute we can pay to the victims.