We all now know about the Plague Epidemic that started in 1896, and spread from Bombay to other parts of the country. It was to deal with this that the Epidemic Act was enacted in 1896 (and which continues to this day). What is much less known is that in 1897, Dr. Haffkine developed the Plague Vaccine in his 2 room laboratory in Parel, Bombay. This was the first case of a vaccine developed in India being used across the world.

The cholera vaccine too has strong connections to India. Dr. Haffkine developed the vaccine in France, but it was in India that he conducted the clinical trials and proved the efficacy of the vaccine in preventing the disease.

By the first decade of the 20th century, India had the capacity to produce vaccines against four deadly diseases- smallpox, cholera, plague and typhoid. Over the next few decades,  both development and manufacturing facilities were set up across the country, and India was a favoured destination for conducting clinical trials.

By the time we gained Independence, India was already a major player in the vaccine space.

Post independence, a facility to manufacture the BCG vaccine was set up in Guindy, Madras in 1948, and after a pilot project, the BCG vaccinations was extended to schools across the country. The campaign to ensure that all children receive the BCG vaccine, however, took off only many decades later.

In 1952, Zydus Cadila was the first indigenous compnay to set up manufacturing facilities for drugs and vaccines, following which many others came up.

Serum Institute set up facilities for the development and manufacture of vaccines 1966.

Genome Valley was developed in the then Andhra Pradesh in the mid 1990s, and attracted many, including Bharat Biotech and Shantha Biotechnics. Shantha Biotechnics, developed a recombinant product which received WHO prequalification as a Hepatitis B vaccine,  which cost a fraction of what the original vaccine cost.

India has been largely ‘atmanirbhar’ when it comes to vaccines for close to a century.

Our biggest successes have, however been in the immunisation of our huge population.

Small pox was finally eradicated in India in 1975- despite our large population and the challenges of reaching far-flung areas, we managed this feat before most other countries.

India's success story with the Oral Polio Vaccine is something that is studies in all public health courses.

If we want to take pride in anything, it is our many historical successes that is what we should be proud of. Not just in the fact that we are a part of the supply chain of a global corporate. 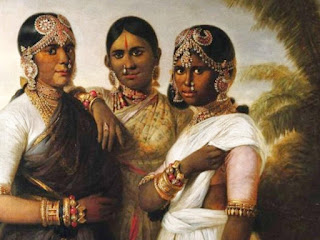 To end with a story of the first “celebrity endorsement” for a vaccine campaign. When the smallpox vaccine was first introduced in the country, the response of the public was not very encouraging. In a bid to boost public confidence, before her marriage to the Maharaja of Mysore, Devajammani, his second wife got herself vaccinated with “minimum loss of dignity” in 1805. A portrait of the queen by Thomas Hickey where she is pointing to the place where she took the vaccine inspired the public to come forward to avail of the vaccination. People sharing photographs of themselves being vaccinated, therefore has a historical precedent from two centuries back.
Posted by Natasha